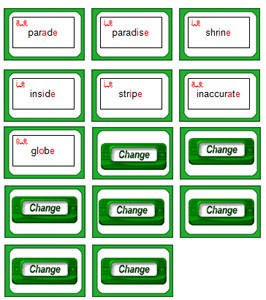 Words in the Game:

Print cards, laminate them & cut them out.

How to Play this Split Digraph Game:

1. Players sit facing.
2. Dealer shuffles the cards and gives five cards to each group member.
3. The remaining cards are placed face down in a pile in the center of the playing surface.
4. Dealer flips the top card off the pile and places it faces up next to the stack.
5. The dealer reads this card aloud being sure to sound the split digraph first then state the whole word to the group 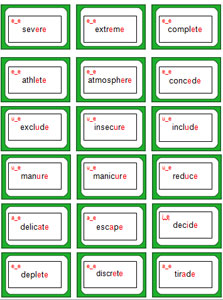 e.g. If the card is ‘globe’ the dealer must say, ‘o like in globe’
If the card is ‘inside’ the dealer must say, ‘i like in inside’
6. Students examine the cards in their hands to see if they have the vowel sound mentioned by the dealer.
7. The player to the left of the dealer has the next turn. If they have a card with the same split digraph sound as the one turned over by the dealer they can place it on top of the pile and say ‘i like it inside’.
8. If they do not have a match they must pick up a card from the face-down pile. If the card they pick up is a match they can put it straight down, if not, they place it in their hand and the next player has a turn.
9. If the player does not have a match but has a CHANGE card they can change the sound being matched e.g. If they had the cards ‘exclude’, ‘include’ and ‘reduce’ they could place down their CHANGE card and say “I’d like to change it to ‘u like in include’”. All the following players must match for ‘a’.
10. Play continues in this manner until one player has no cards left. This player is declared the winner.

NB The power of this game as a learning tool comes from having the children focus on the split digraph by saying, ‘u like in include’ aloud when playing. Ensure they keep doing it throughout the learning sessions.