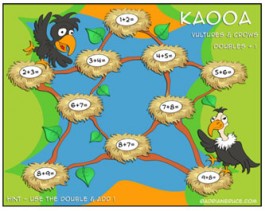 Addition Game – Kaooa (crow) is a traditional strategy game thought to have originated on the Indian sub-continent over 600 years ago. The game may have originally been played on a board drawn in the sand with pebbles as game pieces. In some cultures, the game is known as ‘Vultures and Crows’ and in others, it is known as ‘Tiger and Crows’. This version of the game has been adapted to include Addition Practice.

– The crows’ goal is to block the movements of the vulture.
– The vulture’s goal is to capture four crows.

1. The person with the next birthday chooses to play either as the crows or the vulture.
2. First Turn – Crows place a token on any of the 7 available positions. They must say the answer to the algorithm aloud as they place their tokens.
3. The vulture then places their token on one of the 3 available positions. They too must say the answer to the algorithm aloud as the token is placed.
4. Turn Two – the crows place another token.
5. The vulture is allowed to slide their token one space along the lines shown in an attempt to jump over the crows. If the vulture can jump over a crow and land on a vacant square they can ‘take’ or ‘capture’ the piece. The ‘captured’ piece is removed from the board.
6. Once the crows have all 7 of their pieces on the board they may slide their pieces in an attempt to ‘trap’ the vulture i.e. the vulture is unable to move or jump over a crow. 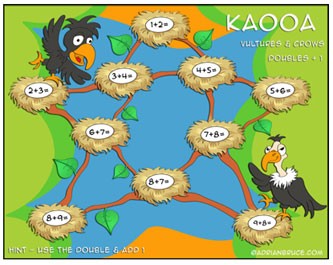 – It is important for the crows to position their initial pieces well. What could this mean?

– Speed and efficiency in number fact knowledge aids the flow of the game. True or False?
– Why might a game like this be introduced to a classroom? List 5 reasons.
– Why is it considered a necessary life skill to be able to calculate quickly and efficiently?
– Using your fingers as your main calculation strategy is accurate but slow. What could this mean? What actions could you take to fix this?
– What strategies have you developed to enable you to have a better chance at winning this game?