Free Math Game – Around the World

Around the World Play Sheets

1. All children sit at their desks or in a circle on the floor.
2. One student is selected, or volunteers to be the first challenger.
3. This student stands directly behind their neighbor.
4. A caller calls out and number fact to solve.
5. The first student to call out the correct answer from this pair wins the challenge.
6. The winning player moves and stands directly behind the next person in the room or in the circle. The losing player returns to their seat.
7. The caller calls out the next challenge and the game continues until one player has won every challenge all the way around the class.

I like to leave them wanting more so I only play this game for one lap of the room or for about 10 minutes. Whichever comes first. 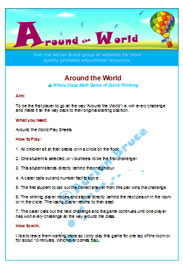 – Discuss the need for automacy and ask students what they are doing to achieve it.|
– Let the students know you will be playing the game in a couple of days and will be using (type of maths questions) so they have time to practice.
– Most humans do not function well under pressure. What happens in your body when you feel under pressure? In your stomach? In your ears? Pulse? Temperature? Thinking?
– Teacher tells of similar stress experiences in their life relating to academia.
– Should educators avoid putting students under pressure or should they expose them to pressure so they get better at coping? Discuss with a partner where you stand on this issue? Share responses.
– ‘Self-directed learners challenge themselves. They move out of their comfort zones and expose themselves to the risk of failure. What are your thoughts on these statements?

Teacher models this next passage in their best, ‘oh so scared/stressed voice 🙂

‘Oh no, it is almost my turn. I’m not going to be good at this. She is going to beat me like she always does. Please don’t ask a multiplication question, I hate multiplication, Mum says she is no good at Maths so it is ok for me to be the same, I’m going to look silly if I get this wrong, I know this, I know this, oh gosh (or words to the same effect) I got it wrong. I sooooo hate Math, it’s so dumb, I’m never going to get his.’

– If I can just get through this without embarrassing myself we won’t play this game for a few weeks and I won’t have to worry about maths.

– Encourage the students to practice the algorithms in their minds as the questions are coming around the room. Gee, I would have won that ‘duel’?
– ‘Gee I didn’t know that one.’ Repeat the algorithm and answer in your mind several times in an attempt to learn it. e.g.- ‘6×9? Ok I didn’t know that one. 6×9 is 63, 6×9 is 63 etc’
– ‘Hmmmm, I’m repeating the algorithm before answering. Do I really need to do that or can I try just saying it? I’ll give it a try’.
– Think it might be good if I ask my teacher for a tutorial session on this stuff.
– Why am I feeling scared? What can I do to fix that?
– I will focus on thinking that will build myself up not bring myself down.
– Encourage students to ask their friends to help them out with the Math behind this task.