Achi – Doubles, Doubles Plus One & More 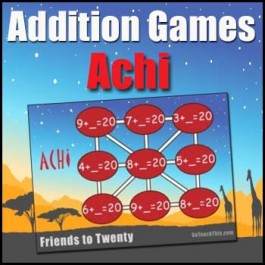 Be the first player to get three of your game pieces in a row either horizontally, vertically, or diagonally.

4. If all the counters are placed on the board and no one has achieved three in a row then players take turns sliding one of their pieces one along the line to the vacant space. (Pieces cannot be slid until all counters are in play)

5. Play continues in this fashion until one player gets three counters in a row and wins the game. 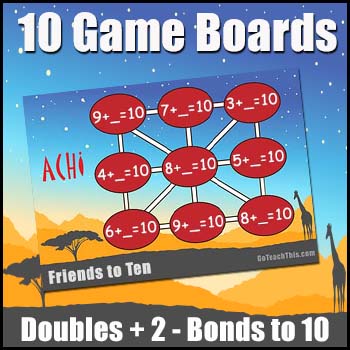 – Have students play the best of 5 matches.
– Have a stalemate rule.
– Have a repeated position rule where if a player repeats the same move three times the game is a draw.

– Plenty of work with concrete materials to ensure the students have a thorough understanding of the way the algorithms and the real world are connected.
– Plenty of discussions that models the language of Addition e.g What is the sum of these two numbers? ‘add’, put with’, ‘plus, combined’, ‘equals’ etc.
– Plenty of calculator play e.g. Teacher says an algorithm, the students input it but before they press equals attempt to answer the problem and then press
equals to confirm their answer. Students need to see the calculator as a learning tool rather than a crutch.
– What fact will you make an effort to commit to memory today?

– While the students are playing the game, do plenty of discussion on how they arrived at their answers. Eg – When doing Doubles Facts, ‘Do you prefer to double the smaller number and plus one or double the bigger number and subtract 1?’
– I find (insert strategy) helps me get the answers faster, how about you try it and see if it works for you. 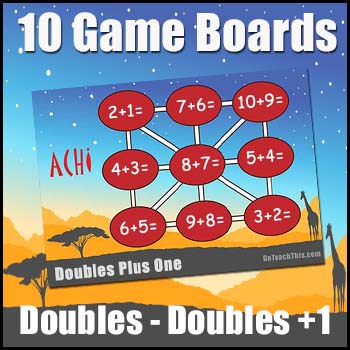 After the Game Discussion:

– Why do we focus on number strategy in these games rather than count one at a time?
– Why are these facts called. Doubles, Doubles Plus One, Doubles plus 2?
– How could we prove being able to ‘see it, say it’ is more effective than counting one number at a time?
– When calculating answers is it necessary to go, ‘Gee, That’s a double plus one fact’? etc Why?
– Take a game you know and convert it so it is a fun way to practice doubles, doubles plus one, doubles plus 2, adding 10, adding nine, Play it with another class in the school.

– What did you find easy today?
– What did you find difficult today?
– What do you need to…
– Today I explored… and found out…
– I think it is important to know about… because…
– I think students should learn about (insert idea) because…
(NB Because it is in the test is WRONG!!!) hehehe
– I think the work we did today built on the work we did on ….. because (explain how)…
– I know… because…
– Today I figured out…
– Explain your thinking when…
– What patterns did you use/discover today that makes …. easier
– Make a conjecture based on your findings.
– What does math really consist of?
– Does either player have an advantage? Explain your thinking.
– Do you have a strategy that makes sure you win when you use it?