‘Fill It Up’ is an Addition game full of strategy and mental computation. It is an excellent math center game and has the potential for many variations in play. 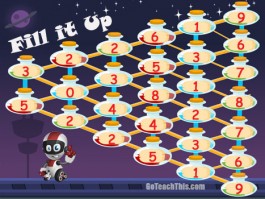 Fill It Up – Addition Game:

‘Fill It Up’ is an Addition game full of strategy and mental computation. It is an excellent math center game.
What You Need:
2 players
10 transparent counters of different colors for each player
1 game board
scratch paper and a pencil for each player

To build a connected trail of counters to total the target number.

1. The person with the shortest hair becomes Player One.
2. Player One chooses a number between 15 and 30 to be the game’s target number.
3. Player One places a counter on a bottle and records the number on their scratch paper. This is their score for this turn.
4  Player Two places a counter on a different bottle then records the number on their scratch paper. No bottle can be used twice.
5. Players continue to place counters and keep a running total until one of the players reaches the target number.
6. The first player to reach the target number is declared the winner.
7. Swap who goes first for the next game.
NB If a player goes over the target number then they lose the game. 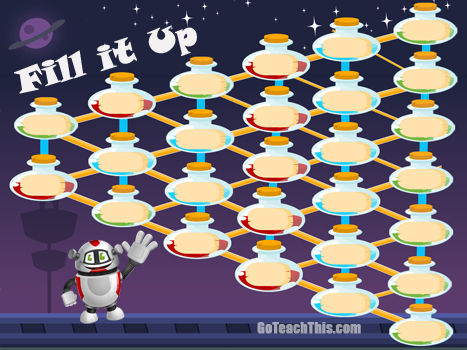 – Conduct number talks on strategies that will aid the flow of the game.  eg Doubles, Doubles Plus One, Doubles Plus Two,
Adding 9, Adding 8, To the Decade, etc
– Discuss the strategies students use for learning number facts.
– ‘Using your fingers as your main calculation strategy is accurate but slow.’ What could this mean? What actions could you take to fix this?
– That feeling you get when you know you don’t know the fact automatically. What is it for you when you are playing a math game?
– What fact will you make an effort to commit to memory today?

– Encourage the use of strategies as opposed to counting on during the game.
– I find saying, ‘This works for me, (demonstrate strategy) how about you give it a try and I’ll come back in a few minutes to see how you’re going with it. REMEMBER TO GO BACK 🙂

– What strategies helped you do well at this game?
– Is there an advantage to the person choosing the target number? Why do you think this?
– Does the person going first in this game to have an advantage?
– One strategy for winning is to simply make a trail of the smallest numbers you can so the other player goes over the target number. Firstly, does this strategy work? What are your thoughts on this strategy?
Is it ‘fair’? Does it achieve the Math learning the game is designed for? List 2 reasons for using this strategy and 2 reasons against using it.
– Have the students approach another classroom teacher and ask if they would like them to teach the game to their students.
Possible Investigations:
– Start the game on a number off the decade. Students explore the lower and upper limits of what numbers can be aimed for. What did they find out?
– Students make a prototype ‘Fill It Up’ game populated with numbers of their choosing. They will need to test out which numbers work and don’t work. Mockup this game on A4 paper to test it and make sure their game ‘Has no bugs’.
Extension:
– Play the game starting on numbers off the decade.
– Students create their own boards in computer software of their choosing or they can use the blank board supplied in this download.