Addition Game – Shut the Box – a great printable addition game for Years 1 to 3. It makes an excellent Math Center game. 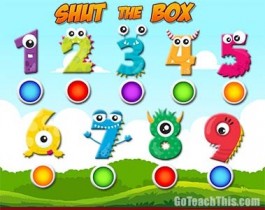 This printable Math game is ideal for enhancing addition skills and mental computations. PLUS… it has really cute monsters 🙂

“Shut the Box”, a game of mathematical strategies and laughter, involves students throwing 2 dies and then adding the numbers. The participants then decide what combination of numbers to cover. Play continues until both students cannot cover a number. At this point, the students tally their uncovered numbers. The lowest total score wins.

A Bit About the Game:

Since the 12th Century, ‘Shut the Box’ has entertained thousands of people. Known by many names such as “Klackers’, ‘ Canoga’, or ‘Batten down the Hatchet’ the game was originally a French gambling and drinking diversion popular with sailors, fishermen, and fur trappers. Throughout history, ‘Shut the Box’ has been a popular pub game, but it is suitable for the classroom due to its application and emphasis on math skills.

How to Use the Counters:

If you toss a 5 you must decide where you are going to place counters based on these rules.

1- You could put a counter on the number 5 and that would be the end of your turn.
2- You could also place counters on any combination of numbers that add up to the sum of 5, for example, 4 and 1 or 2 and 3.

If you throw a 12 you could place your counters on 9 and 3 or on and any other applicable number and other number combination such as e.g. 6, 4 & 2. 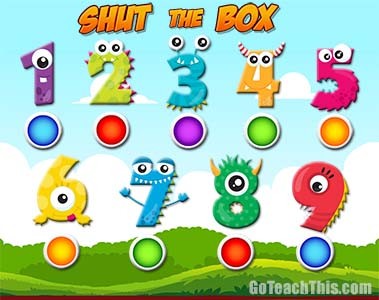 1. Player One is the student whose thumb is the longest in length.
2. Player One throws the dice and adds them together to find the sum.
3. Player One then places the counters on the appropriate circles in the way they choose on their board.
4. Player 2 then throws the dice, adds the numbers shown, and covers the appropriate circles on their board with their counters.
5. Play continues in this fashion until a player throws a combination that it is not possible to cover with any single number or combinations. That player then totals the remaining UNCOVERED numbers and that is their score for the round. For example, if the numbers remaining are 1, 2, then their final score is 3.
6. The other player continues to roll the dice until they too cannot cover any more circles. Then they total the UNCOVERED numbers to get their final score.

The player with the lowest total wins the game.

– When the number 6 and above are already covered then use only ONE die.

Variations of the Game:

– Highest score wins.
– Play 5 rounds and the lowest score at the end of the rounds wins.
– Start with the numbers 1,2, & 3 circles all ready covered.
– Add a Lucky Number – e.g. If a 7 is thrown the player who throws it wins the game.
– Add an Unlucky Number – i.e. anyone who tosses 7 loses the game.
– ‘Say what you see’ – Read the digits left to right to determine your final score, e.g. If 1, 2, and 9 are left uncovered then the score is 129.
– ‘Against All Odds’ – Start with all the odd numbers up and evens down.
– ‘Even Stevens’ – Start with all the even numbers up and the odd numbers faced down.
– As a Betting Game – This game was traditionally played as a betting game. Each player would put up a certain amount of money and the player with the lowest score won all the money in the kitty. Perhaps you could try this with counters and see who has the most counters at the end of 5 rounds.

Careful and detailed notes can help the instructor to determine the strengths and weaknesses of the students, evaluate formative results and implement future strategies.

– Take notes as to students’ behaviors and their approaches to number strategies, i.e. which students use fingers? Which children count all the pips on the 2 die to arrive at the answer? Which students
sub-vocalize their counting?
– Teacher says, “I find (insert strategy) helps me get the answers faster, try it and see if it works for you. ” E.g., the instructor states, “ I find I know the shape of a 4 on the die looks like a square and
because I know it I can see the shape of those dots and consequently won’t have to count them. See if you can make this strategy work for you.”
– Stop the class while they are highly engaged… hehehehe… and say, ‘I’m watching you all play and can’t decide if it is better to cover all the larger numbers at the

– Research – Why is this game called ‘Shut the Box’?
– Using a cardboard box build your own ‘Shut the Box’ Game.
– Collaborate with another instructor to teach their students the game.
– I found it easy/hard to stay focused in Math today because…

Where to from Here?

– Teacher uses the notes taken to plan the next learning experiences.