Cats and Dogs is a traditional ‘Chase and Capture’ board game combined with the learning of Basic Addition Facts. 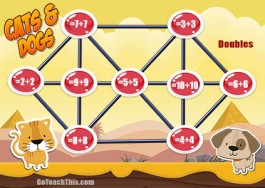 Addition Game: Cats and Dogs is a two-player abstract strategy game thought to have originated in Northern Europe. In this version of the game, a sly elderly cat is trying to outsmart three playful puppies.

NB If a dog repeatedly moves vertically it is considered ‘stalling’ & results in a win for the cat – not a draw. Traditionally this has to happen 10 times but in my classroom, it is 3 times. This keeps the game moving.
7. Swap roles for the next game. 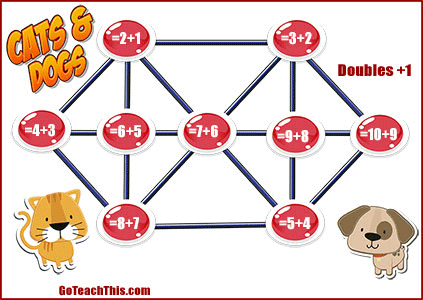 – The cat begins the game on the ellipse shown.
– The cat can place their counter on any empty position on the board.
– Cat goes first.

Before the Game Possibilities:

– Ensure students have a good understanding of what ‘equals’ really means.
– Quick pre-game quiz question. ‘What does “equals” really mean?’ Think Pair Share Answers.
– Equals means ‘the same as’. 5+6=11 really means 5 put with 6 is ‘the same as’ 11. –  So… 11=5+6 really means 11 is the same as 5 put with 6. This is an important mathematical concept. Explore examples.
– Explore and reinforce the need for using efficient mental strategies when playing the game. – Explore the strategies that will help the students do well and this game and keep it flowing.

– Encourage students to plan a move ahead and to anticipate their opponent’s move. ‘If she does that then I will…’ ‘If I go here then they will go…’
– Encourage children to predict the options their opponent has and what moves they may choose to make.
– Ensure students continue to say the algorithms and their answers aloud throughout the game.

Possibilities for After the Game:

– What do you feel you still need to work on after playing this game?
– Games like this are designed to ‘balance out’ by giving each player a different set of rules to move by. In this game, the puppies cannot go backward plus there are three of them. There is only one cat but it can move backward. Do you think this game is balanced or does one player have an advantage?  Explain your answer.
– Mathematicians believe with ‘perfect play’ the game will always result in a win for the puppies.  Explain how you think they would have figured this out?.

– Investigate the origins of the game.
– Argue For or Against – ‘Chase and Capture’ board games such as this one have gone by many names over the centuries. The British called it a ‘Fox and Hound’ or ‘Fox and Hare’ and as part of the game the hare ends up ‘dead’. In Napoleonic Times soldiers enjoyed playing this type of game. To them, it was known as ‘The Soldiers’ Game’ or ‘The French Military Game’. In their version, 3 soldiers chased an escaped prisoner or spy and things did not end well for the ‘chasee’ when captured.
– In this classroom version, the game’s author has chosen to have 3 playful puppies chase a wise elderly cat and no blood is spilled. Write a brief argument, either for or against, the author taking the ‘inferred violence’ out of the game.
– Create your own chase and capture game using computer software of your choosing. Play your game with friends.
– Teach another class in your school how to play ‘Cats and Dogs’
– A famous mathematician once stated this ‘chase and capture game’  “combines extreme simplicity with extraordinary strategic subtlety”. What could this mean?

– Combinational Game Theory is a new branch of Mathematics you might like to check out simply because it is interesting. What is it and how does it work?