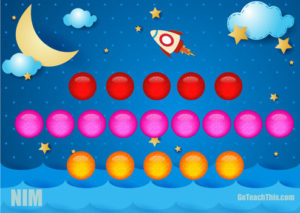 NIM is an ancient two-player mathematical strategy game. This version of NIM includes the option to extend the game to include Addition and Subtraction Basic Facts practice.

History of the Game:

The exact date and origin of the game are unknown but history makes reference to a similar ancient Chinese game called Tsyanshidzi (Jian – shizi) which means “picking up stones”. The game’s current name stems from the German verb ‘nimm’ which means ‘take’.

Cover each of the colored circles on the board with a counter.

NB Players cannot remove counters from more than one row at a time. 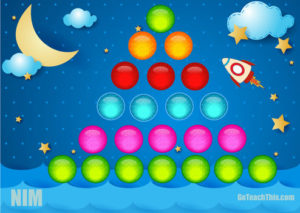 The person who is forced to pick up the last counter loses the game.

1. The counters must be side by side on the same row in order to be picked up. How does this change the gameplay?
2. The person who picks up the last counter is the winner.

– What strategy have you developed to help you win this game?
– Does it have an effect on the outcome of the game who goes first? Yes? No? Explain your answer.
– Try to develop a mathematical law to ensure you win from the first move or second move?
– Is there a point in the game when you know you are going to win or lose? Tell me how you know.

NIM has been used over the centuries by charlatans as a betting game to cheat the unwary out of their hard-earned money.

To do this the con artist knows how to count in binary (Base 2) and using this knowledge they win every time. Research this strategy and try to implement it. 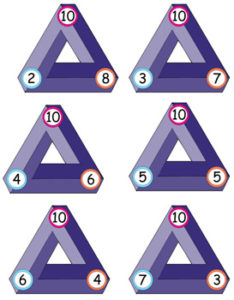