The Essence of the Addition Game: 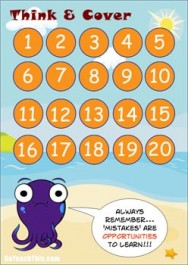 Think & Cover is a strategic thinking game used to practice Addition and Subtraction number facts below 20.

How to Play this Addition Game:

1. Player 1 chooses 2 uncovered numbers and either ADDs these numbers together or SUBTRACTs the smallest from the largest. Player 1 then places a blue counter on the numbers they chose and a red counter on the answer to the algorithm.

– Have students say the full algorithm as they cover the numbers to add an extra layer of learning.
– Have opponents mentally check the algorithm to ensure accuracy.
2. Player 2 removes the red counter & places their own blue counter on that number and a blue counter on another uncovered number. They then either add or subtract the numbers and place a red counter on the sum or the difference.
3. Play continues in this fashion until no numbers can be covered. 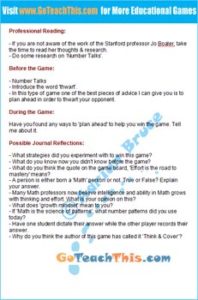 The player who leaves the other player no options to cover is declared the winner.

– If you are not aware of the work of Stanford professor Jo Boaler take the time to read her thoughts.
– Do some research on Number Talks.

– Number Talks
– Introduce the word ‘thwart’.
– In this type of game one of the best pieces of advice I can give you is to plan ahead in order to thwart your opponent.

Have you found any ways to ‘plan ahead’ to help you win the game? Tell me about it. 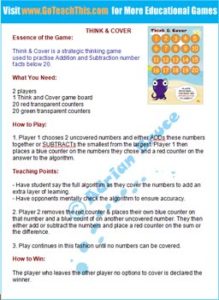 Subtraction Game – How to Play

– What strategies did you experiment with to win this game?
– What do you know now you didn’t know before you played the game?
– What do you think the quote on the game board, ‘Effort is the road to mastery’ means?
– A person is either born a ‘Math’ person or not. True or False? Explain your answer.
– Many Math professors now believe intelligence and ability in Math grow with thinking and effort. What is your opinion on this?
– What does ‘growth mindset’ mean to you?
– If ‘Math is the science of patterns’, what number patterns did you use today?
– Have one student dictate their answer while the other player records their answer.

Where to From Here?

– You can check out more of our Math Games
– Perhaps you would prefer to check out this game on Teachers Pay Teachers.