Math Game – NIM 37 – Addition Strategy Game
NIM 37 is a two-player mathematical strategy game. In this version, a counter is moved around the board and a running total is kept. The player who takes the running total to 37 loses the game. There is a lot of mathematical thinking in this game. Heaps to investigate!
What you Need:
2 Players
1 Counter
How to Play:
1. The person with the highest number made from the last 3 digits of their phone number goes first.
2. Player One places a counter on any number on the game board. This is the score for the move.
3. Player Two then slides the counter to a different number along the blue lines. This number is added to the first to give the running total.
4. Play continues in this fashion until one of the players is forced to make the total 37.
How to Win:

The person who takes the running total to 37 loses the game.

The person who forces their opponent to go over 37 wins the game. 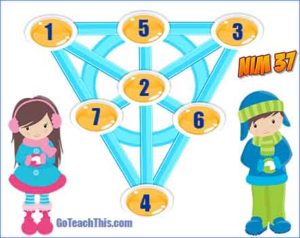 NB a ‘low color’ version of the game is included in the download.

– The person who makes a total of 37 wins the game.
– Count backwards from 37 to zero so zero becomes the winning or losing number.
– Experiment with the total being aimed for e.g a prime number, an even number or an odd number.

– What strategy have you developed to help you win this game?
– Does it have an effect on the outcome of the game who goes first? Yes? No? Explain your answer.
– Try to develop a mathematical law to ensure you win from the first move or second move?
– Is there a point in the game when you know you are going to win or lose? Tell me how you know.

No simply going back and forward between two numbers.