Multiplication Bump – Roll & Cover or Four in a Row –  a Game of  Multiplying Using 2 Dice – Two players thrown two dice, multiply the numbers throw, and cover the spaces on the game board. 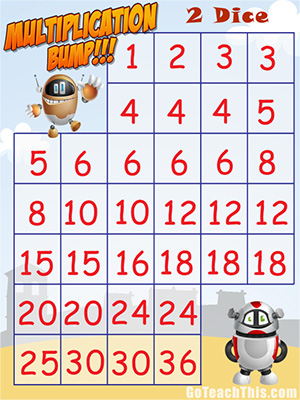 Multiplication Bump or Roll & Cover or 4 in a Row:

Two players throw two dice, multiply the numbers thrown and cover the spaces on the game board.

The person with the longest hair goes first.

1. Player One throws the dice and multiplies the numbers shown e.g. if 6 & 6 is thrown then this means 6×6=36, so their counter is placed over 36.
2. Player 2 then repeats step one.
3. Play continues to turn about until one player has no more counters to place.

If you throw a number already covered, you can BUMP your opponent’s counter back into their hand and place your counter on the spot they previously occupied.

If you throw a number that you already have a counter on you can stack another counter on top of it and this square is said to be ‘Locked In’. This means your counters cannot be BUMPED off the board. 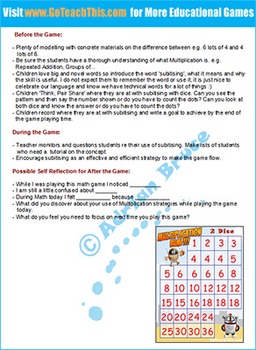 The first player to run out of counters is declared the winner.

Roll & Cover – Start with 15 counters each, roll the dice, multiply the numbers together & cover the appropriate numbers. No Bump Rule. First to run out of counters wins.

Four in a Row – Start with 15 counters each, roll the dice, multiply the numbers together & cover the appropriate numbers. First to get four counters in a row horizontally, vertically, or diagonally wins the game.

– Plenty of modeling with concrete materials on the difference between e.g. 6 lots of 4 and 4 lots of 6.
– Be sure the students have a thorough understanding of what Multiplication is. e.g. Repeated Addition, Groups of…
– Children love big and novel words so introduce the word ‘subitizing’, what it means and why the skill is useful. I do not expect them to remember the word or use it, it is just nice to celebrate our language and know we have technical words for a lot of things 🙂
– Children ‘Think, Pair Share’ where they are at with subitizing with dice. Can you see the pattern and then say the number shown or do you have to count the dots? Can you look at both dice and know the answer or do you have to count the dots?
– Children record where they are at with subitizing and write a goal to achieve by the end of the game playing time. 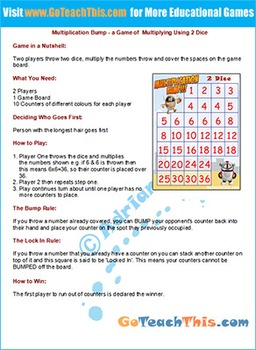 – Teacher monitors and questions students re their use of subitizing. Make lists of students who need a  tutorial on the concept.
– Encourage subitizing as an effective and efficient strategy to make the game flow.

– While I was playing this math game I noticed _______
– I am still a little confused about _______
– During Math today I felt ___________ because ______
– What did you discover about your use of Multiplication strategies while playing the game today.
– What do you feel you need to focus on next time you play this game?
– Once the students have played this game board in its three variations have them explain which is their favorite way to play.