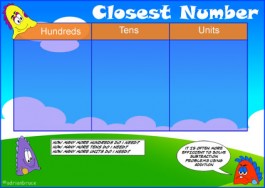 NB In order for the game to progress efficiently one player must look after the numeral cards while the other player looks after the ‘closest number pile’ & the tally sheet. 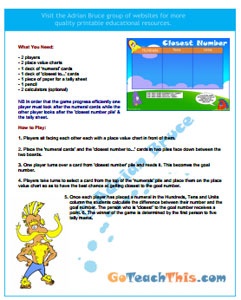 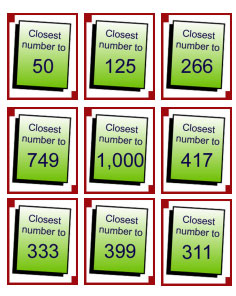 1. Players sit facing each other with a place value chart in front of them.
2. Place the ‘numeral cards’ and the ‘closest number to…’ cards in two piles face down between the two boards.
3. One player turns over a card from the ‘closest number’ pile and reads it. This becomes the goal number.
4. Players take turns to select a card from the top of the ‘numerals’ pile and place them on the place value chart so as to have the best chance at getting closest to the goal number.
5. Once each player has placed a numeral in the Hundreds, Tens & Units column the students calculate the difference between their number and the goal number. The person who is ‘closest’ to the goal number receives a point.
6. The winner of the game is determined by the first person to five tally marks.