This Game Explores the Properties of Square & Prime Numbers 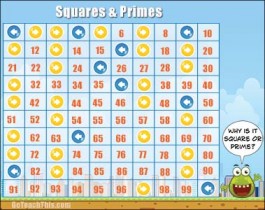 Version 2 – Go back on square numbers and forward on prime numbers.

1. Player One throws a die and moves their counter to the number shown.

The first player to reach or pass 100 is declared the winner.

– Use the electronic or printable game spinners at https://game-spinners.com or the virtual math dice here https://math-dice.com