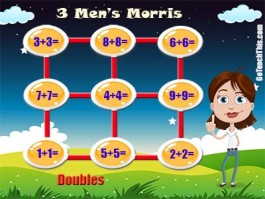 This Addition ‘Three Men’s Morris’ game download is a collection of 14 Addition Game Boards designed to facilitate the learning of Addition Facts & develop strategic thinking skills in an enjoyable way.

To have a little fun and develop strategic thinking while learning Addition Facts.

Three Men’s Morris is a variant of a strategy game that most likely emerged from the Roman Empire. It is not certain exactly how old the game is as there is conflicting evidence regarding its origin. Estimates on the game’s age vary from about 2 000 to 3 400 years old. 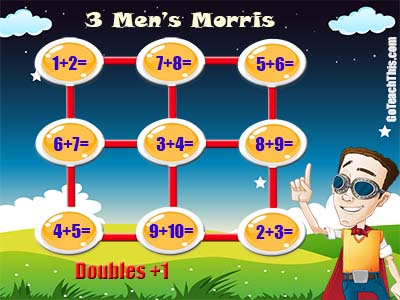 2 Players
1 Three Men’s Morris Game Board
3 counters of different colors for each player.

1. The game starts with an empty board and each player in possession of 3 counters.
2. Decide who is going first.
3. Players take turns placing a counter on the board and saying the answer to the algorithm aloud to their partner.
4. Players slide their counters horizontally or vertically along the given lines to the next empty space once all three of their counters are placed.
5. The player who gets three counters in a row takes one of their opponent’s pieces off the board.

1. Diagonal moves are NOT permitted.
2. Moving a piece one space and then moving it back to the same space on the next move is also not permitted. Even to try this is considered ‘poor form’.

– The player who is first to get three counters in a row and takes their opponent’s piece off the board is the winner. NB 3 Men’s Morris is a precursor to 6 Men’s Morris and 9 Men’s Morris. The removal of the counter when 3 of the opposition pieces are in a row is a central concept in the games to follow. I find insisting on the removal of the piece makes for an easier transition to the more complex games. 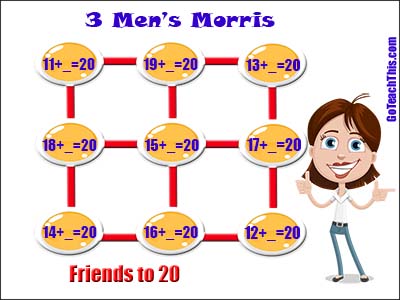