Addition Game – Top and Tail is an Addition game designed for students to help them practice adding using the numbers 0 to 20. This game also reinforces the concept of odd and even numbers in an enjoyable way. 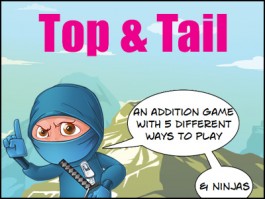 Addition Game – Top and Tail is an Addition game designed to help students practice adding using the numbers 0 to 20. The game also reinforces the concepts of odd and even numbers in an enjoyable way.

There are 5 Decks of Cards in this Download to increase the scope of the skills taught and provide options for differentiation.

1. The person with the next birthday is the dealer.
2. Dealer shuffles the cards and shares them evenly between the players.
3. Players shuffle their cards, make a deck and place them face down on the playing surface.
4. Each player flips two cards from their deck, adds the numbers together then says the sum of the two numbers aloud.

NB In the event of both answers being the same, the players flip a second pair of cards (on top of the previous cards) and say the sum of these cards aloud. 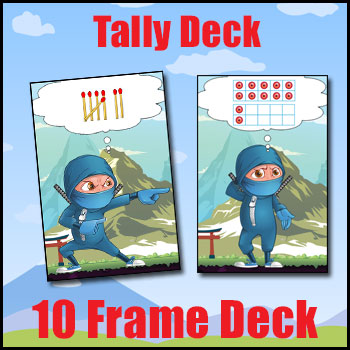 5. Dealer then throws the die.

6. When cards are won they are placed in discard piles next to the players.

7. Play continues in this fashion until each player has no cards left.

– Players count the cards they have won. The player with the most cards is the winner.

– Have the students roll the die onto a piece of A4 paper. If the die goes off the paper the throw is disallowed. —-> This is a very good tip. Believe me. hehehe
– Felt is even better than paper as a tossing surface as it keeps the noise down.

– Revise the concept of odd and even number use e.g. street addresses odd-numbered houses on one side of the street, even on the other etc.
– Do plenty of work to ensure the students understand one-to-one correspondence.
– Discuss – If ‘Sum is the answer to an addition algorithm’. It is a technical mathematical term. – – So why might the term, ‘Doing your sums’ be an incorrect use of the term?
– Explain the concept of ‘growth’ in math. i.e. You are NOT born with a fixed amount of mathematical ability. You have the ability to learn and grow in math.
– If someone says, ‘I can’t do it’ have the courage to add “Yet”. What does this statement mean? How can you put this saying into practice?
– Encourage thought and discussion around mathematical processes and strategies that will make the game flow. 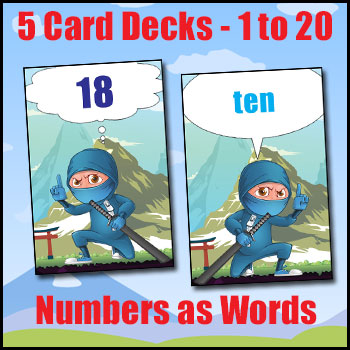 – What strategies have you developed and practiced to make the addition of numbers more efficient?

– Play so the person with the fewest cards at the end of the game is the winner.
– Draw three cards in the flipping phase and create a 2 digit number and a single-digit number. Find the sum of these numbers.
– Use two sets of 1 to 10 cards and two sets of 11 to 20 cards.

Just for a Change:

– Download a variety of free spinners & die from the Itunes Store and Android Market. Explore these with the students to find a ‘good’ one.