Capital Letter Match is a traditional game of Concentration that uses colorful upper case and lower case letters as the game cards. 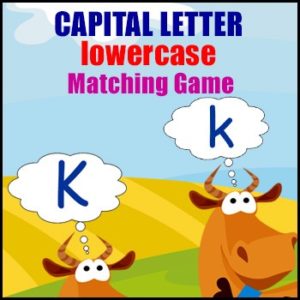 Interesting Facts about this Game:

Memory is a popular card game played all over the world. In most countries, it is called Concentration but the game is also known as Pelmanism, Pexeso, Pairs and in the case of Japan, Shinkei-suijaku. 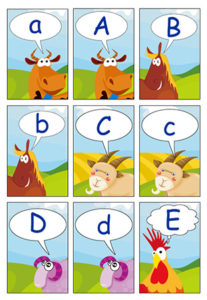 – Print, laminate and cut out the game cards.

1. One player shuffles the cards well and lays them on the playing surface face down in 4 rows of 6. The 2 remaining cards are placed on either end of the formation.
2. In turn players flip 2 cards face up in an attempt to reveal a capital letter and its matching lowercase letter.
– If a match is revealed the player takes possession of the pair of cards and has another turn.
– If no match is revealed the turn passes to the next player.
3. Play continues in this fashion until no further cards are left on the playing surface.
4. Pairs are tallied and the player with the most pairs is declared the winner. 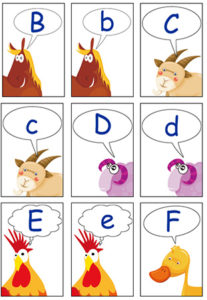 Things to Think About:

Revise the conventions of capital letters – point them out in writing and on wall displays.

Change the number of cards started with to match the needs and skills of the players.

Play as a solitaire game. For each upturned pair which are not a match add a counter to a pile. The idea is to clear the deck in as few moves as possible.

The player who makes the match does not get a second turn.