Multiplication Tables Game – Deadly Red is a strategic thinking game that has the added feature of including Multiplication practice in the gameplay. Ideal for any teacher looking to help their students out with Multiplication. 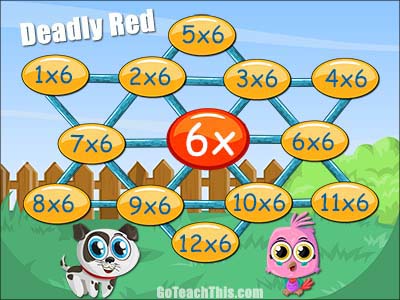 Deadly Red is a strategic thinking game that has the added feature of including Multiplication practice in the gameplay. Ideal for any teacher looking to help their students out with Multiplication.

Place the colored counters over all the algorithms and the red ellipse.

The player who forces their opponent to remove the red counter is declared the winner.

1. The person with the shortest hair goes first.
2. Player One may remove 1, 2, or 3 counters from the board then reads the algorithm, or algorithms, chosen aloud, and states the answer to their opponent NB The counters MUST be on the same line.
3. Player Two then does the same.
4. Play continues in this fashion until a player is forced to pick up the red counter.

– Plenty of exploration of visual representations of the algorithms.
– Use the PowerPoint file to explore and discuss the algorithms used in the game.
– Deadly Red is a game of strategy and you will find there are ‘tricks’ you might discover that will help you win every time. Your task is to try and find this strategy. Be warned though, there is a lot of thinking involved 🙂 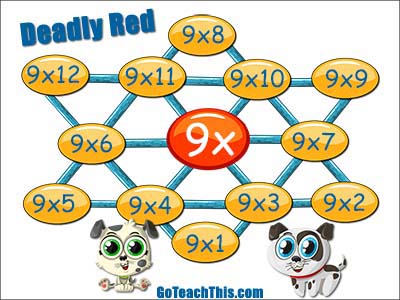 – Take notes on which strategies the students need to have reinforced in future lessons.
– Take note of which students need further challenge and which need ‘easier’ games.
– Suggest a strategy that works well for you when playing games like this and have the students try it. Often having students ‘evaluate’ an idea and see its worth is far more effective than telling them what to do 🙂 e.g. ‘When multiplying by 4 I tend to double the number then double it again to get the answer. How about you give it ago and I’ll come back in 5 minutes to see how you went with the strategy’

Included in this Game: