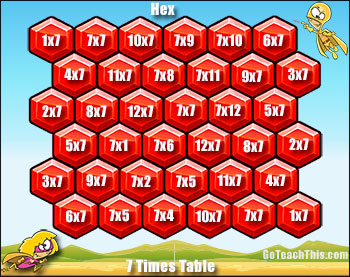 Hex is a two-player abstract strategy game. This version has multiplication fact practice built into the gameplay.

For a player to make a continuous line of counters from one side of the board to the other. 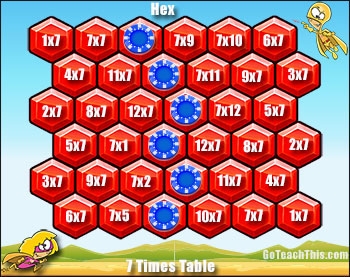 Multiplication Games – How to Win

The first player to create a line from left to right or top to bottom is declared the winner. 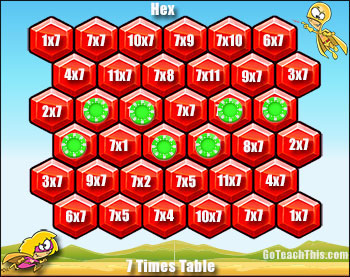 Tables Game – How to Win

1. Lines may twist and turn all over the board.
2. Corners can be claimed by either player.

The Pie Rule – The second player may choose to swap sides after the second move if they wish.

Whilst many students know 8×5 gives the same answer as 5×8, many are unable to represent these in concrete ways e.g. 5 flower pots with 8 flowers in each is very different from 8 flower pots with 5 flowers in each.
– How will you check if students have a thorough understanding of ‘groups of’?
– Do plenty of real-world examples to reinforce the relationship between the abstract and symbolic.
– Use junk mail to ‘go shopping’. Makeup algorithms and number stories from these. 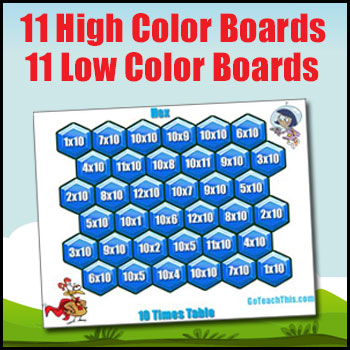 Tables Game – What is Included

– It has been mathematically proven the player who goes first has an advantage. How do you think mathematicians would work this out?
– Being able to swap numbers over and still get the same answer is known as the Commutative Law. Many people think it is important to know this law. Why might that be?
– Why might mathematicians have invented this name?
– Does the knowledge in this game stand up to the ‘So what!’ challenge? i.e. you just spent part of your life practicing this, where will you ever use it? NB Answers relating to money are the easy way out. What more have you got? hehehe

– The second player copies (mirrors) the first player’s moves. What effect does this have on the game? Test it out to see what happens. Could this be a useful strategy?
– Player 2 does a completely random move, to begin with, & then copies Player One’s moves.
– What if Player One notices Player Two is copying moves? Could a completely random move have an effect on the game’s outcome?
– It is said that this game cannot have a draw. Is this true? How might mathematicians work this out?

Included in this Game: