Free Calculator Game – Wipeout is a classroom favorite for teaching & experimenting with place value. It is an ideal warm-up activity. 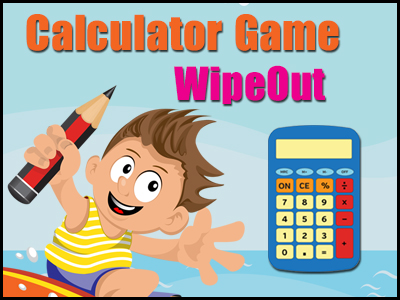 – Take turns to subtract a number between 1 and 9 inclusive from the number displayed.
– The person who avoids making the calculator display zero is the winner.

– Play a game with the whole class discussing & demonstrating number strategies.
– Model a few games in front of the class with one calculator for you & one for each pair of students – computer calculator on IWB or data projector – draw the calculator display on the whiteboard.
– You are not to change the numbers in any other column. Only the column stated’.
– ‘Don’t forget to press the subtraction button on the calculator!!!’
–  You must do the algorithm mentally and tell your partner the solution before you press the ‘equals’ button.
– press ‘equals’ to confirm – reflect on the strategy you used if you arrived at an incorrect answer.
– Discuss the developing stages of computations – use of fingers – use of strategies – automaticity – i.e. ‘See it, Say it’
– Fingers work for starters but are a slow inefficient strategy.
– Why might it be important to achieve ‘ automaticity’?
– Where are you at as a learner?
– I know that under stress I revert back to what I’m sure of. Discuss.
– Walk the room checking the tasks are being done – stand a short while behind the pair that you ‘suspect’ – you know the ones I mean 🙂
– Ask – ‘What numeral is in Tens of Thousands, Thousands, Hundreds, Tens, Units column?
– Ensure the students are verbalizing their thinking.
– Zero is a numeral – the letter O is a letter – insist students use mathematical vocabulary.
– What is the difference between a numeral and a number?
– Say ‘Gee Gee’ at the end of the game. It stands for ‘Good Game’.

Play the game over a week with different skill/strategy focuses:

– Here is a sequence of numbers that will help you win the game every time if you start first.